How I simply dealt with Blog Spam

Wouldn’t you know it? You put a form up online and the next thing you know, bots are sending you spammy messages through the form. Instead of getting great leads in your e-mail, expressing an interest in your products or services, you end up getting a bunch of solicitations for you to give your time and money to other businesses. Arrgh, that’s not the way it was supposed to happen; that’s not cool!

It’s called Blog Spam, and anyone who’s operated a blog can tell you that it adds up quick. If you’ve got a plain old web form collecting comments, then the task of pruning those comments, separating the real-person comments from the ones submitted by spambots, becomes a regular chore. If you’ve got a popular and well indexed site then the mixed comments are easily over a few thousand per month. The challenge is that you don’t want real people to have to wait too long to see their comments appear, and if you’re busy like me then you can’t practically attend to pruning often.

These bots aren’t just trying to get your attention, they’re trying to get inbound links placed on your site, pointing to the site they’re promoting. By increasing the number of inbound links from high authority sites, the sites that the bots are promoting expect to have their search engine rankings improved. It’s a desperate, black hat tack to take, thankfully made less impactful by Google’s recent Penguin ranking algorithm update. Too many people were using this tactic and decreasing the quality of the links Google was returning to its users.

So what did I do?

I brought Blog Spam to a screeching halt by doing one simple thing:

I added a Captcha field to the form.
I used a WordPress plugin called “Captcha” – DOH!
Just pretend you’re from Brooklyn, Staten Island or Queens, and say “Capture”.
Wasn’t that fun? 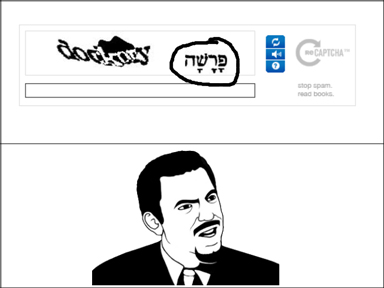 Unlike the torturous Captcha that Google publishes and allows use of in external sites, the Captcha that shows you garbled words twisted beyond recognition and then expects you to type them, this Plugin asks a simple math question. I prefer that simplicity personally and I expect the majority of visitors  to any site to prefer the math question over having to type garbled letters.

I think a lot of WordPress admins assume that Akismet is the means to clamp down on blog spam because it comes pre-installed with WordPress. Once I discovered that Akismet was a paid service I sort of assumed blog spam was just something I was going to have to live with. Now that I’m using the simple Captcha plugin, my blog spam has stopped completely.

Three tools you'll have to pry from my cold dead fingers

Three tools you'll have to pry from my cold dead fingers